Are you contemplating getting your first 1911 pistol but don’t know where to start? If the answer to this question is yes, you probably want to get help to find the perfect pistol.

The good news is that there is a whole raft of 1911 pistols available for you to choose from. On the downside, finding the best 1911 can be a daunting task, particularly for greenhorns like you.

Don’t sweat it! You’ll soon get to know the best 1911 pistols for the money in 2019. But first, it is important to learn basic details about the history of the 1911 handgun to see and appreciate how far this type of handgun has come.

Quick Navigation
Comparison Table
Basic Overview of the 1911 Pistol
6 Distinct Features of 1911 Pistols
Top 6 Benefits of the M1911
Top 10 1911 Pistols Worth Your Money in 2019
Remember, “Best” is a Subjective Word

Basic Overview of the 1911 Pistol

Designed by John M. Browning and initially manufactured by the Colt Manufacturing Company in 1911, the model 1911 (M1911) is the most iconic handgun in the world.

This handgun was initially adopted by the U.S. military, but is now massively popular among civilians across the country and worldwide. The manufacturing of 1911 pistols for commercial purposes is part of the reason why the pistols have become highly sought after.

Nowadays, it is not just the Colt Manufacturing Company that makes 1911 handguns. Other notable manufacturers of the firearm include:

So, what are the distinct features and most important benefits that make the model 1911 pistol appeal to so many civilian users?

Here is a general breakdown of the M1911’s unique characteristics:

The 1911’s trigger is designed to give users one of the easiest trigger pulls, allowing them to shoot multiple rounds of ammo more rapidly. Unlike many other home and personal defense handguns that come with triggers connected to a series of complicated parts, the 1911 pistol simply slides to the rear in a linear pull to allow for more accurate and consistent trigger pulls.

Since 1911’s have single-action type triggers, they can be safely carried while “cocked and locked.” The handguns use a slide lock and grip safety mechanism that prevent discharge of the firearm.

All of the ammo fed into 1911’s are held in a magazine. The amount of ammo that each magazine can hold varies depending on the caliber of cartridges used.

The 1911 relies on the repeated action of a recoil spring to operate.

What makes 1911 pistols highly sought after on the rifle market? These handguns deliver the following benefits to their users:

Many people love the pistol because of the simple fact that it has stood the test of time. Having been in continual use since its inception in 1911, there is no doubt that this Browning-designed handgun works reliably for several years.

The standard 1911 pistol supports a .45 ACP cartridge to give its users a powerful handgun ammunition capacity of 7 rounds. Modern models of the handgun use a cartridge that can hold 7 + 1 rounds.

The shooting accuracy of the handgun cannot be matched by many other types of handguns available on the rifle market.

The 1911 pistol has a thin, slide profile and a slim grip that makes it easy for everyone with quality training, from novices to the most experienced users, to handle.

Although the original 1911 pistol is quite heavy to carry around, there is a variety of lightweight and compact 1911’s for those who’d like to easily carry their handguns wherever they want to go. It is, however, imperative to use the right holster and gun belt to make the pistol-carrying experience safe and comfortable.

Another reason why the 1911 model is popular is that it's available in so many versions, meaning there is something for every individual.

Having learned about key features and benefits of the 1911’s, here’s a rundown of ten 1911 handguns that give the most bang for the buck on any budget right now. 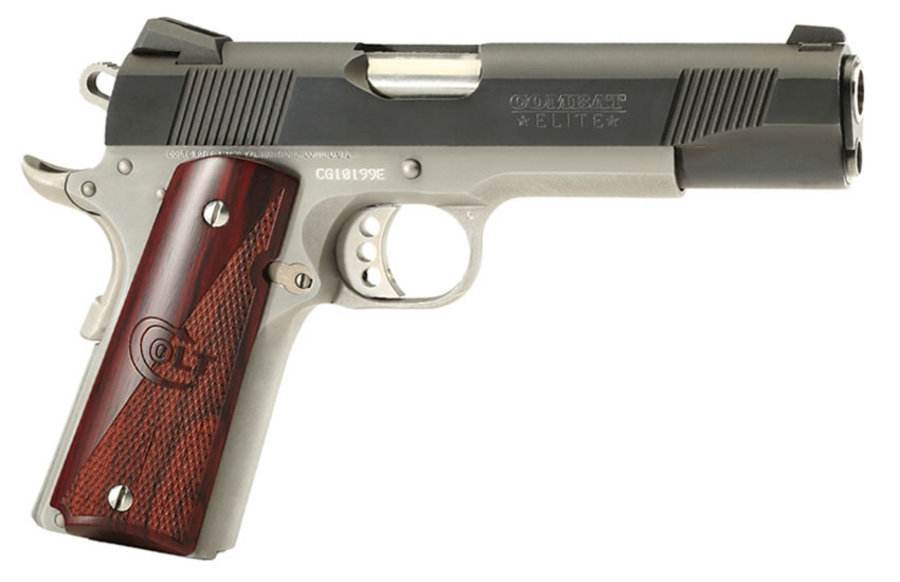 A product of the company that manufactured the first ever 1911 handgun, the Colt Manufacturing Company, the Colt Combat Elite is ideal for various sports shooters across the world.

Standard on this Colt 1911 are front slide serrations to provide a better grip of the rifle when cocking, 3-dot Novak low-mount carry sights, and a beavertail grip safety for additional gripping surface.

This .45 ACP caliber pistol has an ammo capacity of 8 plus 1, so you can shoot several rounds without requiring a reload.

If you want a pistol that is a true work of art, you’ll fall in love with the Colt’s Combat Elite pistol at first sight. This pistol has an attractive two-tone finish that won’t go unnoticed when you see it.

This gun is made in the U.S. 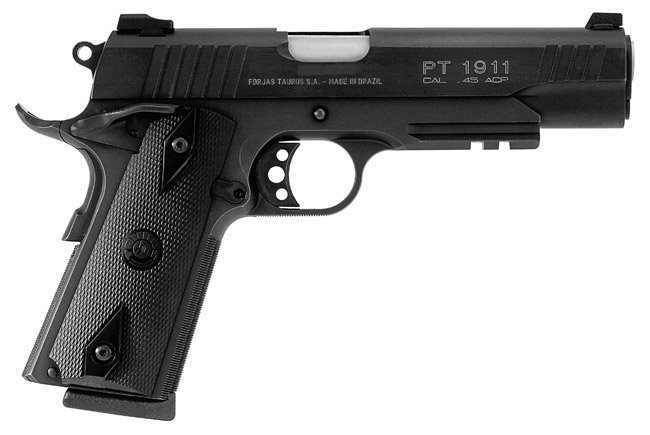 Designed and manufactured in Brazil by Taurus, this 1911 pistol offers people a variety of amazing features that other comparable 1911’s on the market today struggle to outrival.

This Taurus handgun features a dove-tail sight to allow for accurate shooting. The slides and barrels of the Taurus PT-1911 pistols are hammer-forged, and this can be confirmed by checking the rifle’s serial numbers.

Hammer-forging ensures that various rifle parts are accurately shaped into their finished contours, without leaving behind a rough machined surface. The trigger is short and crisp to complete the ensemble. 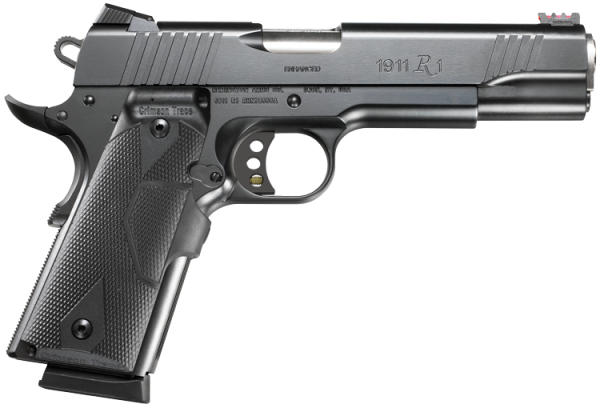 If you are looking for a pistol design that holds a candle to the Browning’s original design, you should give Remington’s 1911 R1 Enhanced a try.

The R1 enhanced is a simple, enhanced model of the maiden 1911 pistol manufactured by Colt, and it maintains the basic features of a classic 1911 – a short and crisp trigger, checkered double-diamond grips, and dove-tailed front and rear sights.

Though it does not drift too far from Colt’s first ever 1911, Remington’s R1 Enhanced comes with many noteworthy improvements, including front and rear slide serrations, a fiber-optic front sight to replace traditional front sight, a low-mount rear adjustable sight, and more for improved safety and performance.

The best part is that there is a wide range of triggers, sights, grips, beavertail safeties, and other accessories that can be used to transform this handgun into the perfect rifle for you. 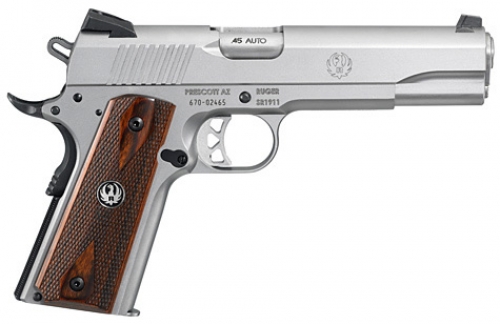 Despite being one of the relatively newer 1911 pistol models on the market, the Ruger SR-1911 handgun has quickly become a popular choice for many people.

This handgun is made wholly from stainless steel to maintain the homogeneity of color. It has a number of key features including 3-dot sights, a thumb safety, a beavertail safety grip, a bushing wrench, and a lowered and oversized ejection port.

Some of the extra features that are unique to this firearm include its distinctive Titanium firing pin, which typically accelerates much quicker than a traditional steel pin when hit by the hammer.

If you are a beginner, you are going to find the Ruger SR-1911 easy to use. Plus, you are also going to love the reliability of this solid handgun. 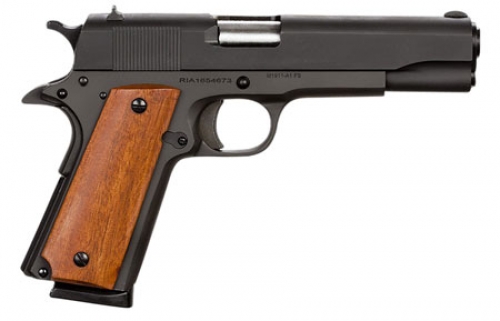 When it comes to buying stuff, people often get what they pay for, but the RIA designed by Armscor is an exception to this rule.
The RIA is one of the cheapest 1911 pistols available on the market, but don’t let its small price tag fool you.

The design of is low-cost rifle is similar to that of the initial 1911 pistol in most aspects and exhibits little to no performance failures when properly used and maintained.

If you are looking to buy one of the best 1911’s but don’t have enough money to purchase a high-end model, consider settling for this affordable option.

Perhaps the most notable downside of the RIA is that the fit and feel is not as good as that of more expensive models sold out there. 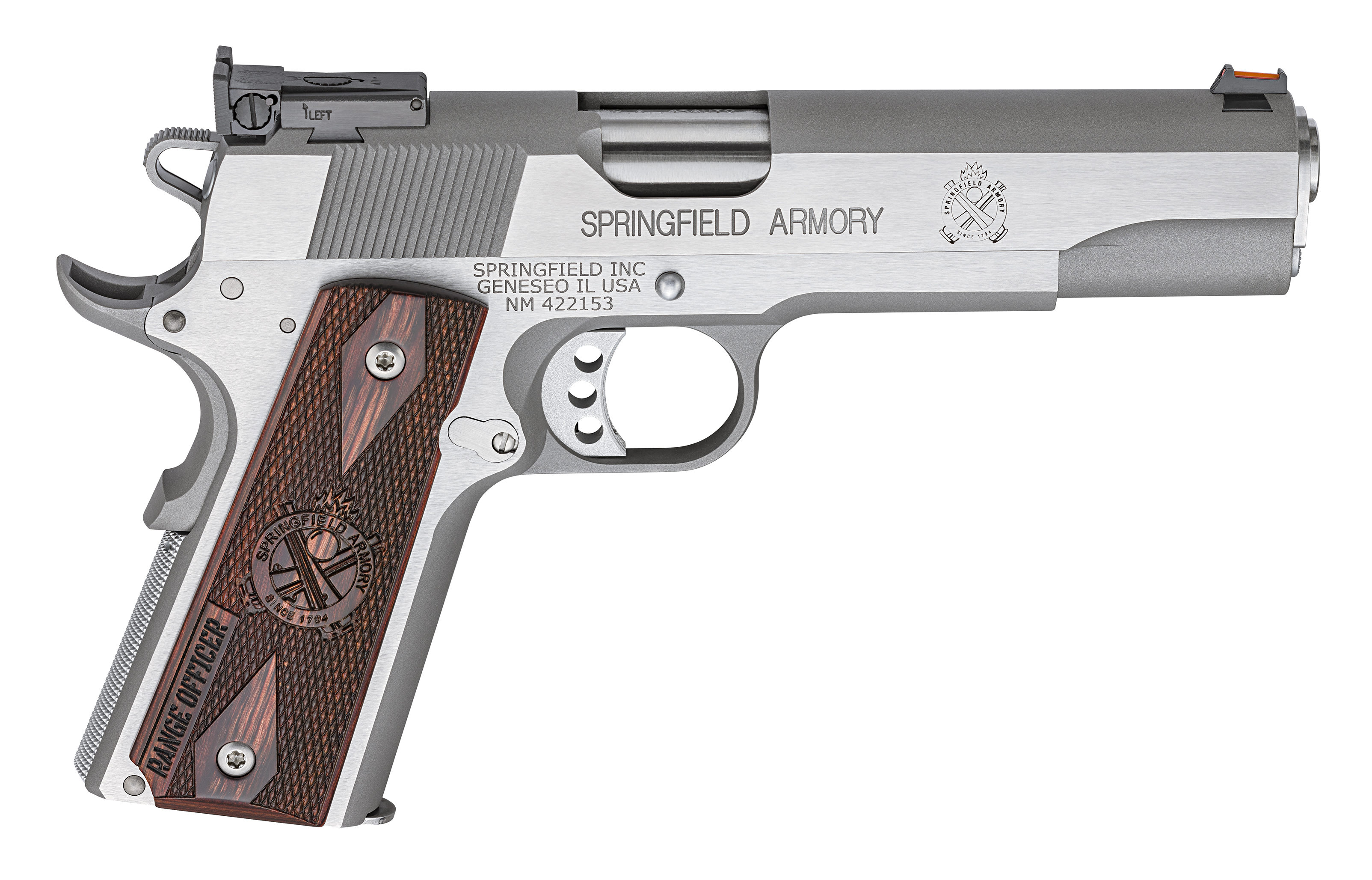 If you are looking to purchase a steel frame 1911 for competition purposes, you should consider getting yourself the Range Officer manufactured by Springfield Armory.

This 9mm caliber 1911 handgun combines both functionality and aesthetics by maintaining the visual appearance of the Browning-designed 1911.

It comes with the good-old thumb safety, a 7-round magazine, target sights, 5” stainless steel match-grade barrel, and a smooth dust cover to make the rifle complete.

This 1911 is available in a few subtle options that are perfect choice for competition shooting. It is one of the competition guns that don’t come with a very big price tag. 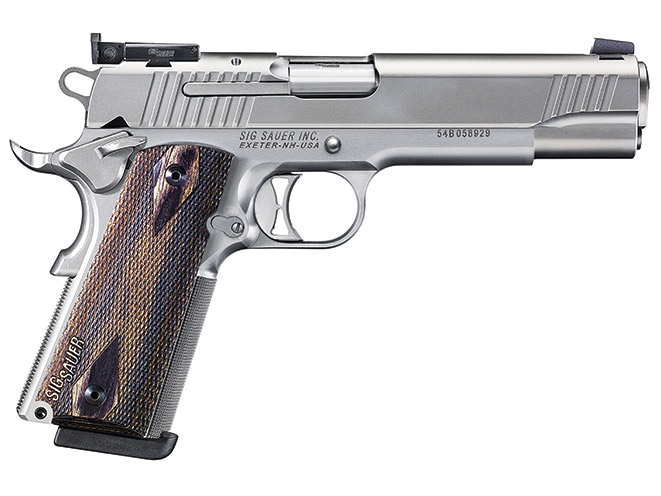 It has a skeletonized trigger, a match-grade magazine, barrel and bushing, double-diamond-wood checkered grip panels, drift adjustable target sights, and a thumb and a “speed bump” grip safety feature.

Perhaps the biggest downside of this 1911 pistol is its heavy weight. With a weight of roughly 2.6 lbs. and a length of 8.75”, the Match Elite may not be easy to carry around or conceal outside of competition. 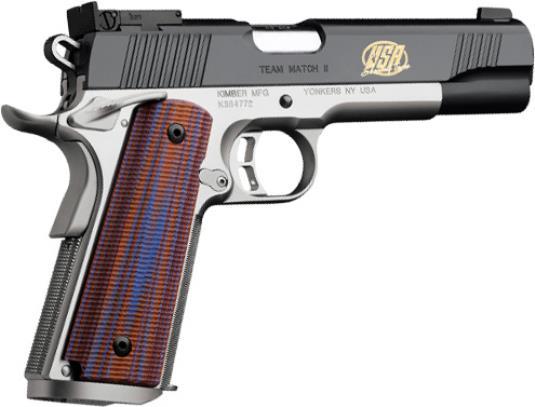 The Team Match II is available in the historic .45 ACP caliber, as well as in 9mm. Standard on this 1911 handgun is a match-tuned trigger, adjustable target sights, an unmarked 8-round magazine well, a 5” match-grade fitted-by-hand barrel, and an ambidextrous safety system.

As this pistol was specifically made for the U.S. Shooting Rapid Fire Pistol Team, it comes with the Team’s logo engraved on it.
If you are looking for a competition gun, this is one of the best buys on the rifle market right now. 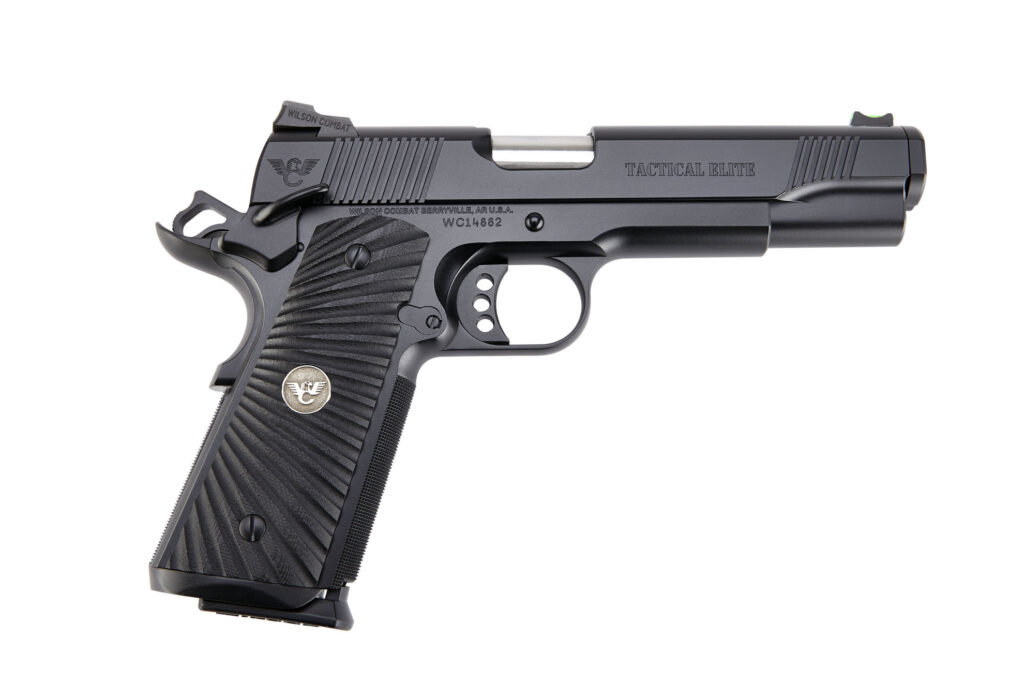 If you are looking for the ultimate combat-proven pistol that can easily be carried around, this handgun is a great buy. One of its major downsides is the high price tag. 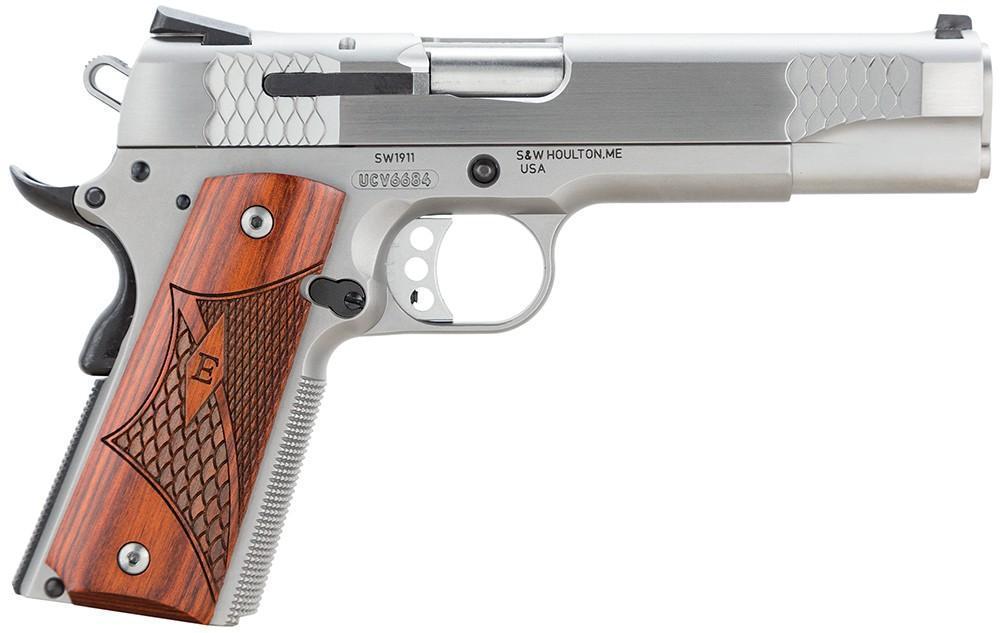 This handgun is chambered in either .45 ACP or 9mm. It has a spherical butt frame and wood grip panels to provide ambidextrous grip and thumb safety. It also PC-tuned to allow for smooth cycling.
Other standard features include adjustable front and rear sights, a 5” barrel with rounded barrel bushing, and a capacity to fire 8+1 rounds of ammunition before requiring a reload.

If you are looking for a multi-purpose firearm you can use for hunting, shooting competitions, personal protection, home defense or concealed carry, this Smith & Wesson 1911 pistol is a great choice.

Remember, “Best” is a Subjective Word

Ideally, there is no single “best” 1911 pistol for all situations. Finding the best 1911 is all about choosing a budget-friendly pistol designed for your intended use.

Hopefully, you’ve been able to identify a 1911 that suits you perfectly from the above list of recommended 1911 handguns.